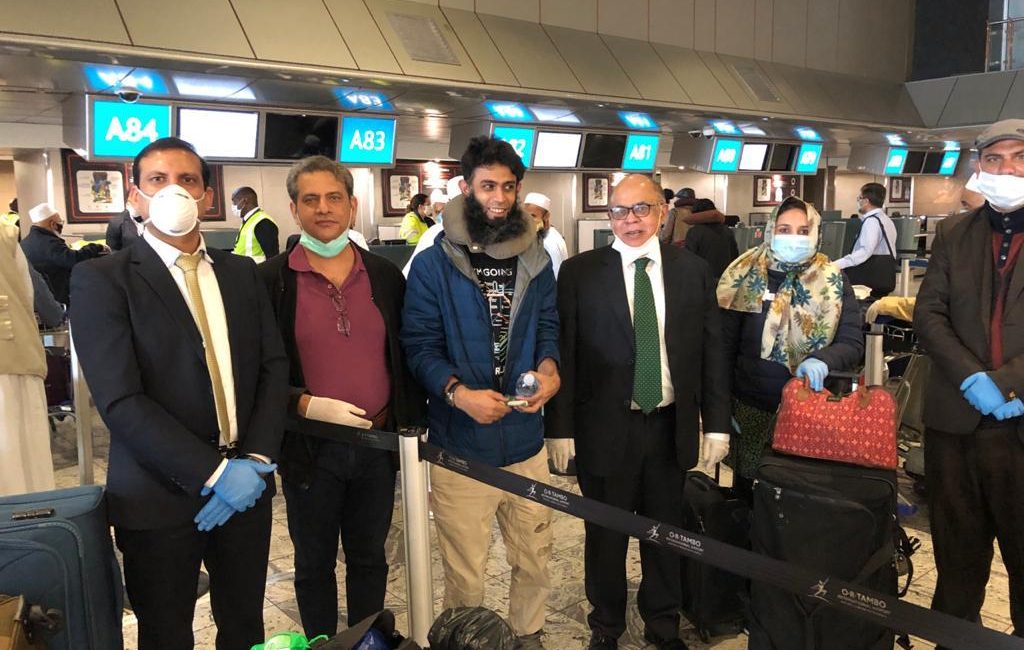 The High Commission of the Islamic Republic of Pakistan in Pretoria, South Africa in cooperation with the Government of the Republic of South Africa have carried out the evacuation of 81 stranded Pakistani citizens from South Africa and six other neighboring countries by a Special Flight on 20th April, 2020.

The evacuation process was formalized with the help of local Muslim Welfare Organization, Baitun Nusra that had arranged a private charter flight to repatriate stranded and destitute nationals of both countries.

All those stranded Pakistani citizen who were stranded in South Africa and its neighboring states were transported back to home country, who were able to register their status with the Pakistani High Commission in Pretoria, South Africa. These citizens were stuck in Southern Africa region due to lockdown and severing of international flight operations since 21 March, 2020.

The composition of Pakistani repatriates consists of people who were visiting South Africa for tourism and business purposes. Our stranded citizens were actively traced into other cities of South Africa such as Cape Town and Johannesburg, in addition to the capital city.

Pakistan High Commission was also able to fetch our stranded nationals in neighboring countries of South Africa. This included 08 from Botswana; 09 from Kingdom of Swaziland; 07 from Mozambique; 02 from Kingdom of Lesotho and 07 from Zimbabwe. This segment of our citizens were transported with the assistance of extraordinary gesture and collaboration of South African authorities particularly, the Department of International Relations and Cooperation (DIRCO), Home Affairs, Police, Immigration and other relevant entities. Without their involvement, this repatriation would not have been possible. Our citizens were allowed to enter and exit South African territory without having valid visas for South Africa. Moreover, this whole process of evacuation took place during a strict countrywide lockdown status and restrictions on movements both within South Africa and its neighboring states. The Government of South Africa provided police escorts to each and every caravan of Pakistani stranded citizens entering the country from borders of different neighboring countries.

The High Commission of Pakistan remained actively engaged in arranging logistics, accommodation, arrangements in local hotel and other necessary assistance to facilitate the repatriation on fast basis to make this happened before the month of Ramadhan. The flight was operated mostly on self finance basis.

The Special flight is expected to bring back about 80-90 South African nationals, mostly members of Tablighi Jamat, who are stranded in Pakistan.

The evacuation and repatriation of Pakistani nationals through the special flight is a manifestation of a successful diplomatic cooperation between the Islamic Republic of Pakistan and Republic of South Africa for a genuine humanitarian cause at trying times of global uncertainty and multiple anxieties.