The World Food Day 2022 was celebrated at FAO headquarters in Rome with the theme “Leave no one behind”. The event was attended by the three heads of the Rome-based UN Agencies, special guests and by Representatives of Member countries. It also received messages from the UN Secretary-General Antonio Guterres, Pope Francis and the Italian President Sergio Mattarella.
The annual World Food Day event commemorates the founding of the Food& Agriculture Organization of the United Nations (FAO)on 16 October 1945.
The Director-General of FAO, Mr Qu Dongyu, the President of IFAD, Mr. Alvaro Lario and the Executive Director of WFP, Mr. David Beasley also addressed the ceremony.
This year’s edition takes place at a time when global food security is facing threats from various directions such as, climate crises, long standing conflicts, and the COVID-19 pandemic. The number of people facing hunger worldwide is on the rise — as much as 828 million in 2021,while 3.1 billion people cannot afford a healthy diet, according to FAO’s latest “ The State of Food Security and Nutrition in the World Report”.
For the first time, also on the Agenda was the “Inter-generational Dialogues” which brought the representatives of the International Youth Committee as active participants in the event.
Mr Khalid Mehboob, Alternate Permanent Representative of Pakistan to the Rome-based UN Agencies, also addressed the meeting on the special invitation from the Direcotr General of FAO.
Mr Mehboob has been associated with FAO for 53 years. First as a staff member at senior level; and then as Alternative Permanent Representative of Pakistan to FAO; Member of the FAO Committee on Constitutional and Legal Matters; Chairperson of the FAO Finance Committee; and as Independent Chairperson of the FAO Council.
Mr Mehboob’s address to the meeting was comprehensive and covered some important and interesting topics such as (a) the reasons that led to the creation of FAO in 1945, (b) its work under its various Directors -Generals, and (iii) to give an indication as to how it has developed over the years.
Mr. Mehboob highlighted that FAO is more relevant than ever on the world stage, needed more than ever by those it serves. As food and agriculture take on an increasing and important position globally, the world looks to FAO to find the way forward.
Mr. Mehboob also noted that FAO is and continues to be the global platform for dialogue and negotiation on all matters relating to food security, agriculture and nutrition. It must continue to be, as it is today, a dynamic living work in progress based on fact and experience, striving, to achieve its most noble mandate while leaving no one behind. 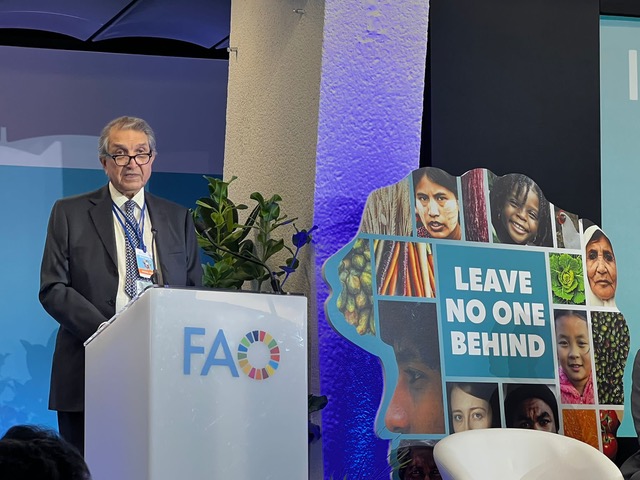