Mr. Aziz Surakmatov, Mayor of Bishkek has suggested signing of a Sister City Agreement between Bishkek and Islamabad during the meeting of the Ambassador Faisal Niaz Tirmiz with him on December 5, 2018. He has invited investors to build five-star hotels in the Kyrgyz capital to cater to the needs of growing tourism potential in the country. He also offered to host a business delegation in Bishkek in order to identify different sectors where businessmen of both countries could cooperate with each other. He agreed with the proposal of Ambassador that visa facilitation should be eased between the two countries for promotion of tourism and trade. 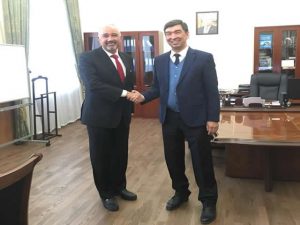